It has been an exciting first week, in the second part of this half term. In Science we learned about the forces (pushing and pulling). During English we planned an argument text regarding whether the UK should pay for space exploration. In maths we recapped our memories on multiplying and dividing by 10, 100 and 1000.

It has been an extremely fun week in Year 6! During Science, we made the Solar System using different varieties and sizes of fruits. We also learnt about the brain and how it works. Here are some facts about the brain: we have 3 brains in 1; it smells like cheese; feels like jelly and it gives commands to the body. This week we took part in an Escape Room. We had to answer maths questions to open locks, to get clues. We needed to get 8 clues to then open the final lock which had 3 different types of prizes. During English we wrote an origin story for characters from "The Nowhere Emporium" Daniel, Lucien Silver and Vindictus Sharpe.

What a surreal week we've had in Year 6. In Science we sorted the order of Planets in our Solar System - we created mnemonics to help us know the order, for example, My Very Epic Mum Just Sings Using Notes. During English we finished our second chapter of our own versions of "The Nowhere Emporium". In Maths we multiplied and divided fractions with integers. During Spanish we learnt the alphabet and rooms inside of a house. In Guided Reading we marked a SATS test.

What a marvellous week in year 6! In P.E we played tennis are still practising to be masters at it. During Guided Reading we read The Nowhere Emporium and we all are extremely enjoy it. In English we have been writing a second chapter to our own version of "The Nowhere Emporium". During maths we have been re-capping our memories of adding and subtracting fractions. In computing we recapped our memories on cyber-bullying.

This week has been phenomenal for Year 6. First of all we've had a spectacular Judo session which everyone truly enjoyed. During Maths we have been jogging our memories on fractions of amounts, and we played a little math game called 21. In Science we started our topic on Space and we even got to use the VR headsets to look at marvelous Space related pictures and videos. We also got a letter from Timothy Nigel Peake the only British astronaut to board The International Space Station. During English we wrote a fabulous setting description based on "The Nowhere Emporium". In P.E we have been practising how to become masters at Tennis and Hockey.

We have had an interesting week in Year 6. In English, we have been writing a setting description based on a book called 'The Nowhere Emporium'. In maths, we have been re-capping our memory  of fractions  and comparing improper and mixed number fractions. During science, we worked on electrical circuits. We tested ways in which to make a light bulb glow brighter and a buzzer buzz louder.

A SPECIAL THANKS TO OUR EDITORS!!!

This term we are going on a journey to...

What an extraordinary final week (Christmas Week) at school for this year, before 2020. We had an amazing christmas party, with plenty of food! Also, we all played party games such as, musical chairs, musical statues, musical hoops and the 4 corners challenge. On Friday we watched Elf and did christmas crafts.

Thank You for reading the blogs for this term!

What an incredible WW2 week we have had!!! Earlier this week, on Tuesday, we took part in a Holocaust workshop where we learnt about what life was like in WW2 for the German Jews. We heard survivor stories and became aware of how German Jewish children were evacuated from Germany. Also, on Thursday, we went on a trip to Lotherton Hall where we roleplayed as  World War 2 evacuees. We also learnt first aid knowledge, morse code and found out fascinating facts about  the history of the house and how it became a hospital for soldiers during WW1 and 2. In Maths, we rworked on simplifying fractions and solving problems. During English, we wrote a newspaper report based on the WW1 Christmas Truce and how extraordinary it was. In Espanol we read the story of Little Red Riding Hood in Spanish.

Friday 20th December - Christmas Fun Day. We will be making cards, calendars and watching Home Alone before breaking up for the Christmas holidays!

What a remarkable first week in the festive month! During English, we have started to write a newspaper report by using our plans we created earlier in the week about the Christmas truce of 1914. In  Maths, we compared and simplified fractions. We also added fractions with different denominators, which meant than we had to find the lowest common denominator.To prepare for Maths we have been playing a game called hesitation, which is fun. We also had a carol singing concert today. Thank you for all the people who attended.

What an astonishing week in Year 6!!! This morning we did "Christmas Craft Morning" ,our parents came in and we did crafts based on Christmas. There was a variety of activities such as make your own; patterned snowflake; Christmas crackers; Christmas trees and Festive themed paper chains. Also for special occasions we had a Sleeping Beauty Pantomime which was acted out by 3 people and most people enjoyed it. In Maths we continued working on long division and kept on working harder and harder. During English we wrote a World War topic related letter in the point of view as a soldier writing to his/her loved ones. In Computing we are writing a branching story based on whatever we want. During P.E we worked on our Handball skills by throwing and catching the ball and dropping the ball at a specific height and catching it before it bounces on the floor twice. And last but not least In SPAG ( Spelling, Punctuation and Grammar) we recapped how to use commas.

What an extraordinary week in Year 6 we've had!  We did bikeability, which is a cycling course about learning how to ride (safely) on the roads. In Art we cooked Lord Woolton's Pies which links to our history topic. This pie was made in World War 2. We also made firework art based on bonfire night. In English we started writing a set of instructions to bake a pie. During Maths we recapped our knowledge on adding fractions with different denominators and recapped times tables. This week was anti-bullying week we learnt lots about what bullying is and how it can affect people.

We have had an amazing first week, in our second half term of  year 6! In Guided Reading, we are reading a new World War 2 book called The Harmonica. We have been practising our inference skills using our previous knowledge of Anne Frank.  During maths,we have been dividing. In history we have gained more knowledge about evacuees and who evacuation affected. We had great fun hot seating. We have also sketched bonfire art which was cool.

Persuading women to work during WW2 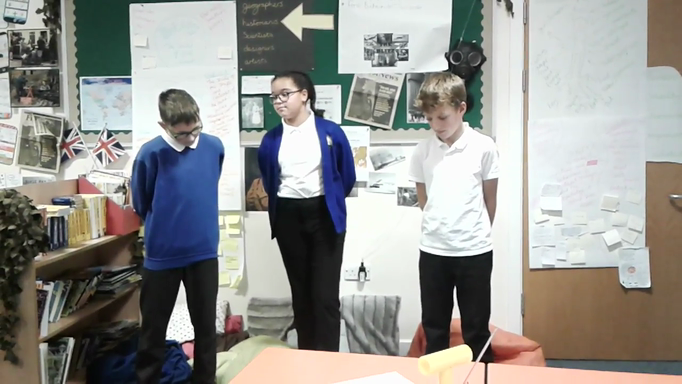 Our first Half Term is over and what a lot we have achieved! During English we have been learning the famous WW2 poem "In Flanders Fields" by John McCrae and what it means. In Maths we have been jogging our memories on fractions by multiplying, dividing, adding and subtracting them. This week in Guided Reading we have finished reading Anne Frank and have almost finished Friend or Foe. We had our smashing showcase this week - did you come? We performed the poem In Flanders Fields and sang the wartime song Hey Mr Miller. We all think that our parents were very impressed.

We can't wait to find out what we are learning about next half term.

Year 6 hope you can make our annual showcase on Thursday 24th October at 2:30pm. There will be the opportunity to view what your child has been learning about this term, poetry and singing.
Another astonishing week in Year 6. During English we have been writing character descriptions on fictional characters we have created. In Geography, we have been looking at maps of the UK and also at train routes from London to Plymouth (this was the same journey that two evacuees used in the book that we are currently reading, Friend or Foe). This week in maths, we have been looking at venn diagrams, common factors and problem solving.  Throughout the week, in Guided Reading, we have been learning about a young German Jew named Anne Frank . In PE, we learned a new sport called Lacrosse-everyone loved it!

Today the whole of year 5 and 6 were conscripted into the British Military. During our WW2 day we have done a variety  of fun military activities,including - Military Marching Drills, Researching roles in The Army, The Navy, The Royal Air Force and we have been re-enacting The Battle Of Britain Britain. This week in English we have carried on with our World War 2 topic by writing a narrative story based on the Blitz.What an amazing day!

Training To Be A Soldier

Jobs In The Army

Another amazing week completed in Year 6! In Maths we have been jogging our memories about bar models. During English we have been writing a narrative story, in first person, about the events of the Blitz. This week in P.E we have been practising our Hockey skills , by splitting into 4 different teams and having multiple games. While reading Anne Frank, during Guided Reading, we have been learning about how life was for Jewish people, in World War 2.

This week has been very exciting! In topic we became historians and wrote out a timeline of when special events happened in World War 2, for example - The Blitz, The Battle of France and many more. Some of us even wrote a paragraph of writing about these events! Then,in English we were finishing off our non-chronological reports about The Blitz, when we had finished we even got to type them on a laptop but only after we had checked and edited our work. In PSHE we created posters for different charities and wrote three facts about them. In PE we did netball and worked on our defending and interceptions.  We also learned how to do the Hakka which is a New Zealand rugby dance to intimidate their opponents.
Exciting English

Another exciting week in year 6. In maths we have been learning about negative numbers and using them to add, subtract and solve problems. In English we have been planning a non-chronological report on The Blitz . In Science we have conducted an experiment to find out which material is the best insulator. And finally in P.E we have been learning all about how to play netball and hockey.

This week we have been up to so much! In maths we have been rounding numbers and  problem solving. In English we have been writing diary entries from the perspective of a WW2 evacuee. In science we have been looking at materials and their properties and are looking forward to conducting an investigation next week.