Support and Advice for Parents/Carers

At Sharp Lane Primary School we help young children to understand about personal safety through the PANTS Campaign by the NSPCC. Please share the video below with your child...they love to learn the Pantasourus song!

We take incidents of bullying very seriously at Sharp Lane Primary School and pride ourselves on the restorative work we do with all children involved.

The Group Chat | Bullying | I Got You | Childline

Child Sexual Exploitation is a form of sexual abuse where a child believes they are in a consensual relationship but in reality they are being groomed by their abuser.

Children can be trafficked to other abusers around the UK and continue to be sexually exploited and feel that they have no choice but to comply.

When a child is being exploited they are given gifts, money, drugs and affection in exchange for performing sexual activities. The grooming will often lead to violence and intimidation to keep the child under their control and to ensure that the child fears seeking help.

The initial grooming process can take place in person, through messages or through social media.

If you are concerned that a child is being sexually exploited call 999 and report your concerns.

At Sharp Lane Primary School we have a carefully planned preventative PSHE curriculum that teaches children personal safety, healthy/unhealthy relationships and consent. All members of staff receive regular Safeguarding training to spot the signs of Child Sexual Exploitation at the earliest possible stage. 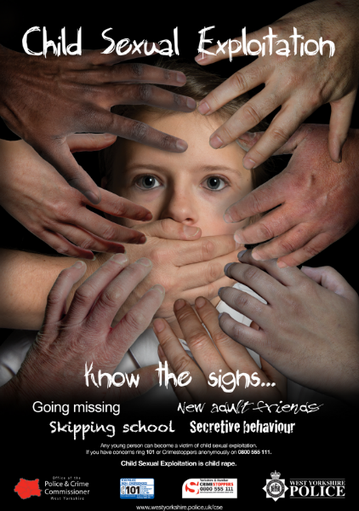 Criminal exploitation is child abuse where children and young people are manipulated and coerced into committing crimes. NSPCC

The grooming process of Child Criminal Exploitation is very similar to Child Sexual Exploitation where the abuser will give the child things such as gifts, money and drugs in exchange for the child to be involved in criminal activities or running drugs around the country.

County Lines is police term for urban gangs exploiting children, as young as 10, to move drugs around the country using dedicated mobile phone lines. Children are trafficked away from home where they will usually stay in the home of drug users whilst they are exchanging drugs and money between gangs.

Children can be "recruited" into County Lines by other children already involved, older children or by being groomed online.

If you are concerned that a child is being coerced into Child Criminal Exploitation, contact the police on 999 and report your concerns. 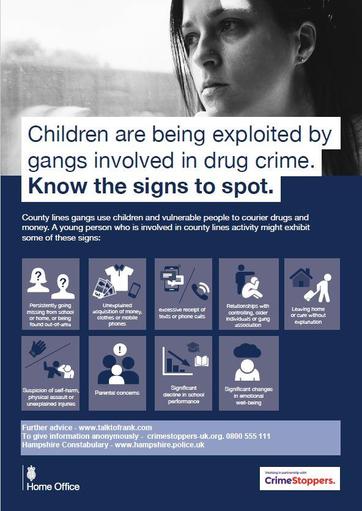